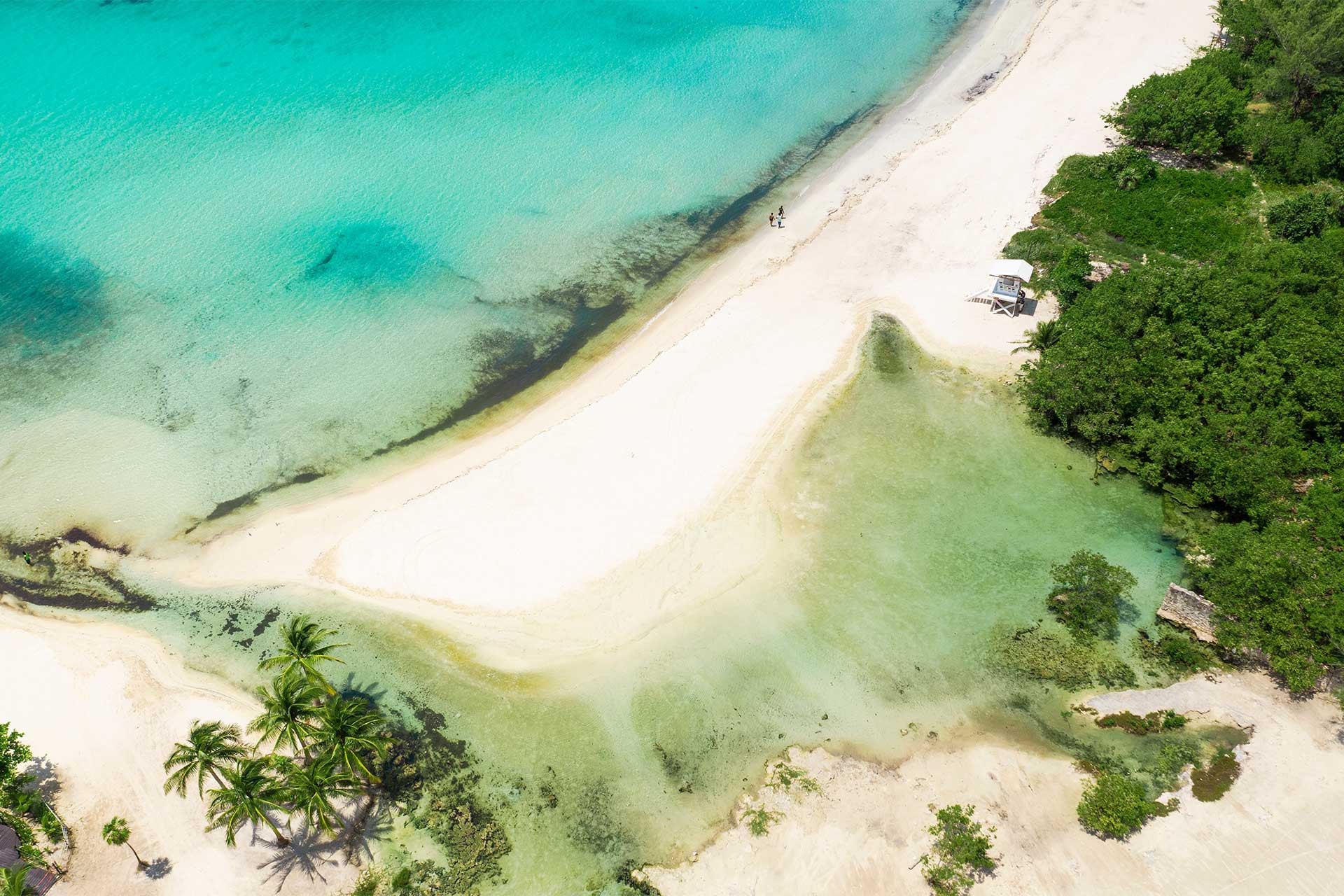 Playa del Carmen is located within the Riviera Maya, alongside the Mexican Caribbean coast, which runs from south of Cancún to Tulum and the Sian Ka'an biosphere reserve. Playa del Carmen has a tropical savanna climate with rains from June to November. Summers are hot, and nights are warm year round. Playa del Carmen began as a small fishing village and settlement that grew exponentially over time. Today it is one of the largest resorts in Mexico.

Originally a small fishing town, tourism growth began in Playa (as it is called now by locals) with the passenger ferry service to Cozumel, an island across the Cozumel Channel and a world-famous scuba diving destination. In 1996 it had a population of 10,000. While in 2003 it already had a population of 49,000 inhabitants. During Mayan rule it was known as "Xaman Há" (Water of the North) and was a point of passage for the Mayans who made a pilgrimage to the sanctuary of Ixchel on the Island of Cozumel.

In recent years, this coastal town has exploded in rapid development with new luxury hotels and residential buildings, restaurants, boutique stores, and entertainment sites such as the aviary, golf courses and all-inclusive resorts. The area can be divided into two main areas: one is mostly residential with a few hotels and some stores; the latter contains the largest all-inclusive resorts as well as the golf course and a significant number of residential properties. Its coast is lined with isolated beaches with different shades of blue and fine white sand, surrounded by massive coconut palms, as well as those that have the coral reefs very close to the shore. In general, the waves are gentle and some areas have bodies of freshwater nearby, known as a cenote or lagoon. Besides its famous beaches, there are activities for all audiences: from the visit to the Beach Aquarium, the 3D Museum of Wonders, theme parks, SAYAB the Planetarium of Playa del Carmen, cenotes visits or diving. 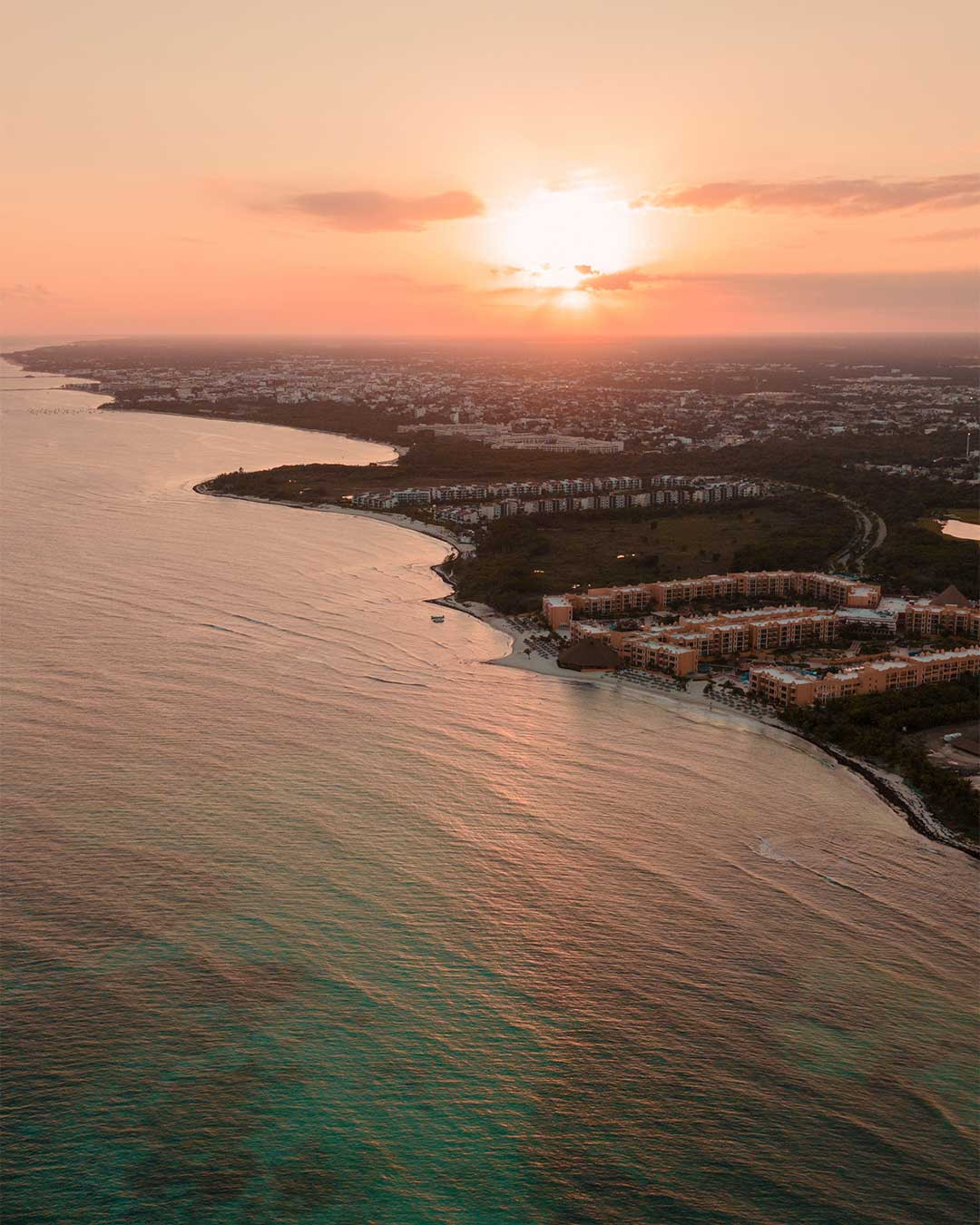 Dive sites near Playa del Carmen are blessed with beautiful caverns and rich reef systems straight offshore. The area is home to a wide variety of marine life such as female bull sharks, eagle rays, Loggerhead Turtles and Green Turtles. Occasionally, sailfish and whale sharks might be spotted at sites further from shore. The healthy Playa del Carmen reefs also play host to a variety of tropical species. There is no bad time to dive in Playa del Carmen. On average, water temperatures vary between 77 and 82ºF (25 and 28ºC) in Playa del Carmen, remaining constant year-round, and cool only slightly during the winter months.

From November until March, Bull Sharks are commonly found off the coast, and many other pelagic species are attracted to the area by the slightly cooler temperatures during the winter months.

In Playa del Carmen, the bull sharks are in their natural habitat, so you are able to observe their daily rituals. Bull Shark Season occurs every year through November to March when pregnant female bull sharks return to shallow waters in front of the coast of Playa del Carmen. Located only a few minutes off the shore, the dive site is on a 24m/72ft, sandy bottom.

These magnificent sharks can be seen in two ways: a Bull Shark "feeding dive", which is strictly controlled with extra dive masters and an experienced specialist feeding them sparingly, or on a longer "viewing dive". On both tours, you are almost guaranteed a close encounter with these majestic sharks! For a detailed account of this experience, you can read the section on diving with bull sharks! 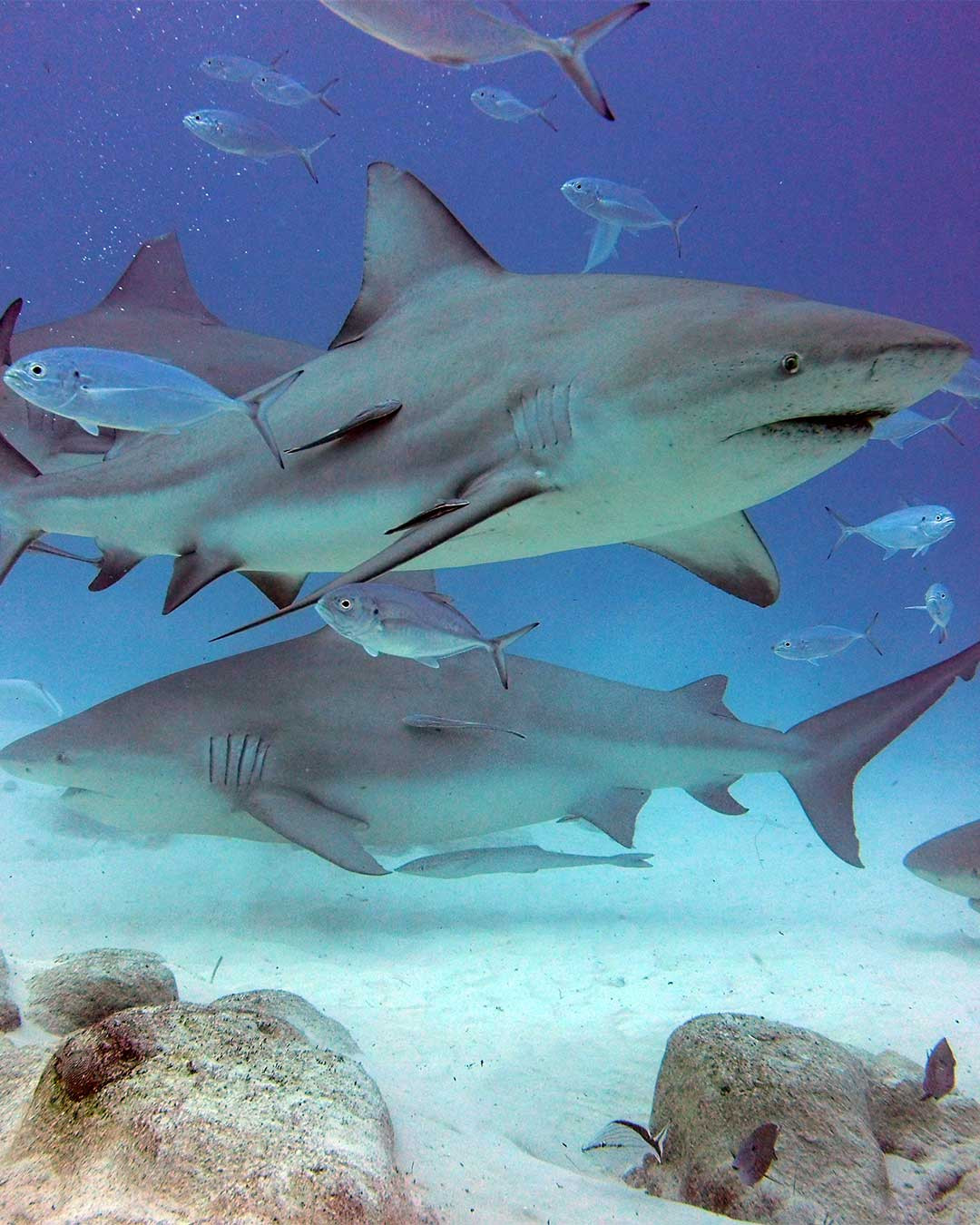 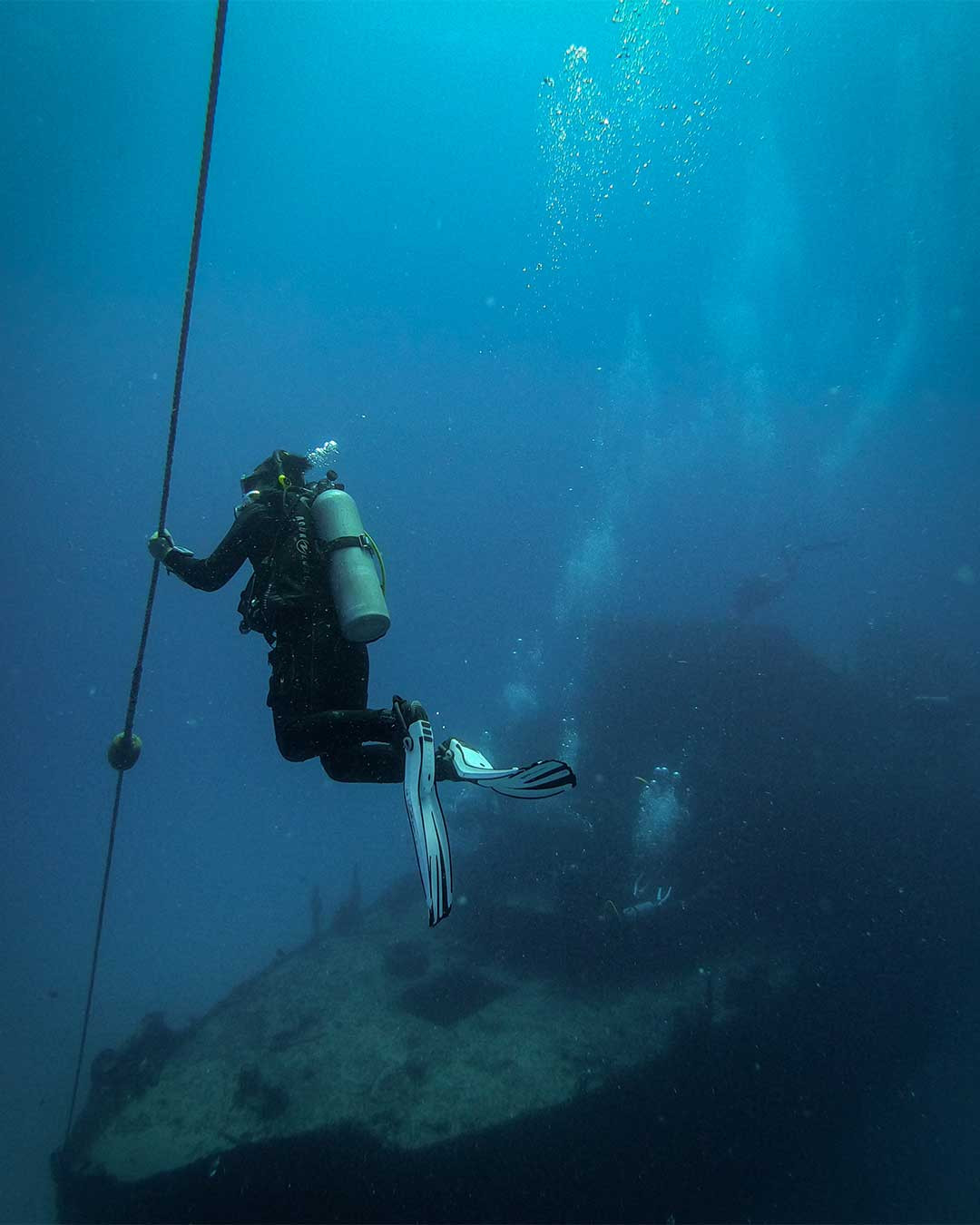 This ship was originally launched by the American Ship Building Company of Lorain, Ohio on March 13th, 1943 as a minesweeper built for the US Navy during World War II, so prepare to see some spectacular sceneries!

Playa del Carmen is in a privileged spot along the Riviera Maya. It sits in between Cancun and Tulum, and lies directly in front of Cozumel Island, which can be reached from there by ferry. Playa can also be easily reached by car or taxi from the Cancun International Airport at only 45 minutes southbound on Highway 307.

Our Blue Experience Diving Center is just as close! Another 35 to 40 minute drive down Highway 307 in the direction of Akumal, turning left off the road on the Hotel Sirenis exit. Need a ride? Please ask for our private transportation services through our commercial partners.

Also, if you're staying in the area between Playa del Carmen and Akumal, you might be at a hotel we offer FREE pickup service at! Check the list. 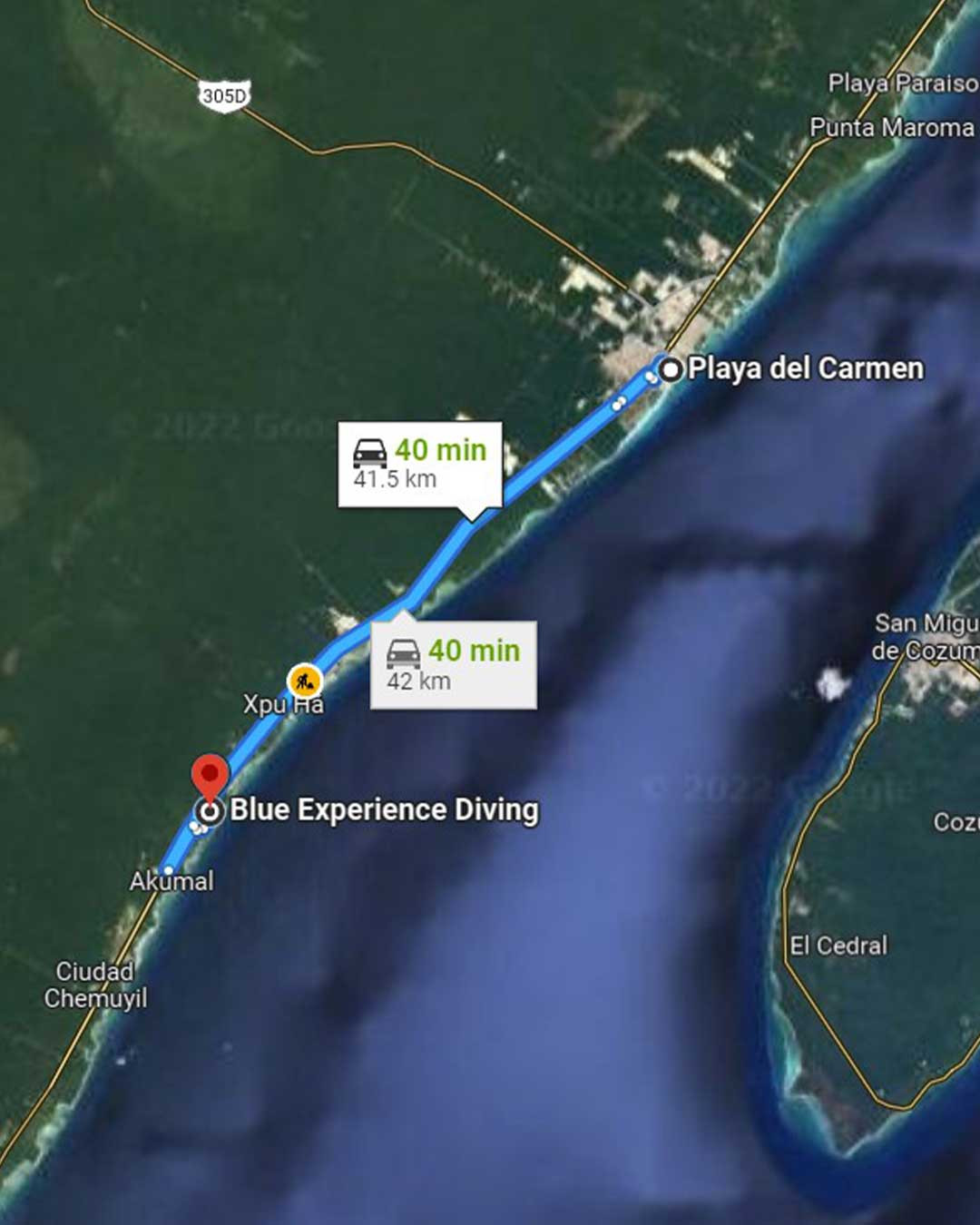